A few years back I pitched my first ideas on starting P+ to people I trusted as advisors. The reactions were mostly positive, but there is one reaction that I still remember to this day: ‘the thing you’re talking about is not a company, it’s a movement’. I think the statement was correct, although I don’t think organisations and movements will be that different in the near future.

My generation – also called the Milennials – is the first generation to grow up entirely connected to everything and everyone. We value networks, question if linear career paths are useful to pursue (or: exist at all), and many of us would choose a meaningful career over a rich one. We’re also influenced less by authority our former generations, instead we’re influenced by our networks more than ever. By 2020, 46% of the workforce (US numbers) will consist of Milennials. Just imagine the shift this entails for organisations. Here are a couple of things we see coming our way (slide with more details downloadable here):

Given the shifts coming our way, it is no surprise that many companies we see strive for ‘more entrepreneurship’, ‘fail fast cultures’, ‘better ways to engage employees’, better performance management systems, or even change their entire organisational structures to be flat (holacracy, sociocracy 3.0 etc.). My tip of the day is simple: study ‘social physics’, learn how networks operate and how ideas spread. It will be relevant for the future of your company (or was it a movement?), 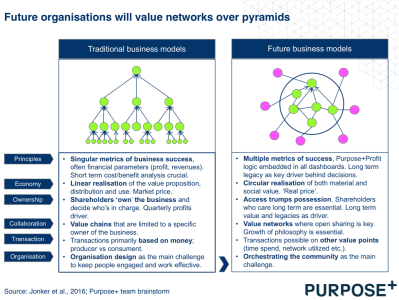 My wishes for a thought-filled, contemplative and productive day!

Rens ter Weijde is a partner in Purpose+.