We live in a universe that’s gigantic, probably infinite in size, in which we sit on our own ‘pale blue dot‘, located in just an average neighbourhood of our Milky Way galaxy. The picture of our pale blue dot was famously taken by Voyager 1, when the spacecraft turned it’s camera towards earth from a mind boggling distance of 6 billion kilometers. It showed us how little we really are, and most people felt humbled seeing it.

The past years have seen extensive research into the far edges of space, searching for extraterrestrial life and visualising existing exoplanets. The results so far: there are likely to be billions of exoplanets, and life on them is likely, but reaching them seems out of our possibilities. We have been sending radio signals and other devices (including records of our music on earth) into space, but so far have heard nothing back. So far, for all we know life is something very special, and we may well be the only intelligent civilisation that is currently alive. And: if there are other civilisations out there, chances are we’ll never be able to reach them (the nearest star is still 4,2 light years away, with travel time estimated to be tens of thousands of years).

Given the situation we’re in, what could be considered meaningful to do in life? According to Wubbo Ockels, the now deceased Dutch astronaut, the ‘purpose of life is to sustain life’. We fully agree, and would like to add an extra dimension: a positive perception of life for those that have the luxury to be alive.

Purpose is a classic psychological need that is universally present. It is therefore described in most psychological ‘need’ models, like the Maslow Pyramid (‘self-actualisation’) and PERMA model (Seligman, 2011). Studies in the US army also showed that soldiers that loose a sense of purpose are more likely to be suicidal. However, a purpose-driven mindset is not that common, with ~28% of the workforce perceiving their work that way (see our Inspiration Pack ‘The Purpose-Driven Employee’ under Downloads). Those that do tend to stay longer in their jobs, are 50% more likely to be in a top position in the firm, and tend to have much higher eNPS scores.

On the business case argument, studies show that just 4 in 10 organisations have a clear purpose (according to their executives, real number may be lower). However, ~90% of executives belief that having a clear purpose contributes to financial performance, branding, a great culture with great values, and in the end employee satisfaction. Revenue growth numbers over time corroborate these beliefs: companies that prioritise purpose grow faster than those that do not. Those companies are also more likely to effectively transform themselves over time. See our Inspiration Pack ‘Business Case for Purpose’ for more data. 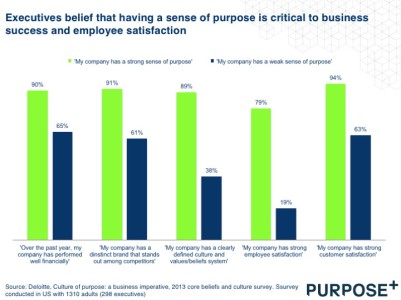 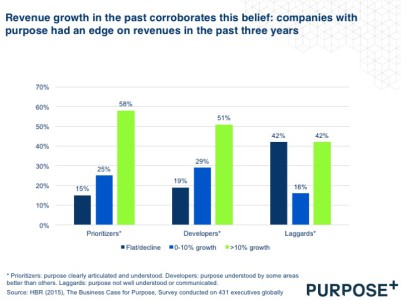 On the last argument, companies can provide tremendous amounts of benefits for their environment if they’re willing to do so, due to their scale, impact on people’s lives and reach. Some companies like Patagonia, Nike, Google, Microsoft, Facebook and Whole Foods Market have consciously chosen to do so, with many efforts on their way. Their impact is often tremendous; since they simply have much to give to the world. More on this can be found in our Inspiration Pack ‘Doing Good’.

In short, since people need purpose, so do organisations. There is a clear business case to be made for more purpose-driven business models; and many companies have thrived doing so. At Purpose+ we will continue to be the catalyst on this topic, and we hope many of you will join us in the transition towards a more purpose-driven business paradigm. We envision a world where positive impact (or: real value creation) will be the central  measurement in organisations.